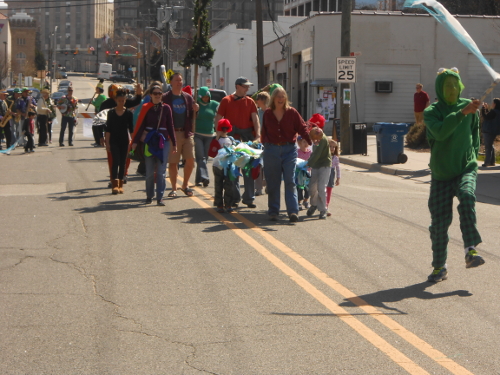 Frog leads the parade as the Bulltown Strutter strike up the band. Heading up the march is a Girl Scout troop with a frog pond. A state park ranger marches in is camouflage reversible salamander orange cape. Then more frogs, a zebra swallowtail butterfly, a ladybug on a leaf, a beaver, an opossum, a fox, a pileated woodpecker and a squad of woodpeckers and cardinals, a beehive, a unicorn, a few dogs, and two stroller-riding babies at the end.

Volunteers Preserving the Natural and Cultural Heritage of Northeast Creek

The 12-digit hydrologic unit code, the unique identifier of hydrologic units (basins and watersheds) assigned by the US Geological Survey and the US Department of Agriculture Natural Resources Conservation Service.

Actions You Can Take

US EPA Office of Wetlands, Oceans, and Watersheds

Despite the text at the bottom of each page, this site does not allow replies as comments.

All other comments go to colleen@northeastcreek.org.

Your 5-Day Forecast at a Glance